Today we are excited to have a guest blog from Joshira Maduro, Verbal Branding Associate at Addison Whitney!

Getting a drug from the lab to the market is an incredibly time consuming and resource consuming task. There are several rounds of clinical trials the drug needs to pass, which only occurs after pre-clinical research. Then there is the approval process, where the regulatory agencies not only check all the related data about the drug to ensure its efficacy and safety for approval, but also review the proposed brand name to ensure it is sufficiently unique from names of drugs already on the market.

In the pharma world there are two factors that regulatory agencies consider “risky”: if looks or sounds too much like a drug already on the market and if the name gives too much of a claim or over-promise. 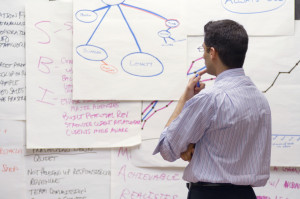 For instance, a name with the word “cure” in it, or a name that shares its first five letters with another drug already in the market would have a difficult time gaining approval.  Companies avoid these risks by going through a rigorous screening process before submitting their final name candidates. The screening and approval process can easily take months, if not a full year, so it’s important to make sure the naming process provides more than enough “safe” options to keep up with launch timelines.

However, sometimes it pays off to take a riskier route, going outside the norm and developing a name that would stand out in a saturated marketplace. These names, if approved, have a high opportunity for easy name recognition, which greatly benefits future marketing efforts.

Generally speaking, brand names fall into three strategic categories – Blank Canvas, Scientific/Functional and Aspirational. They are each defined by the rationale behind the brand name and how it ties back to the product and the overall brand strategy. Additionally, they each carry “safe” and “risky” name characteristics, which must be balanced when creating a name that fits into the category. Here are three main types of brand names, and where they fall in the “safe name” spectrum:

So which of these types of names is the best for your drug? Well, there is no clear-cut answer.  Each of these kinds of names has their risk, so there is no truly “safe” option. However, it would take more effort to get a more aspirational name to pass screens and gain FDA approval compared to a blank canvas name. On the flipside, an aspirational name can yield more differentiation in a saturated market compared to a scientific/functional name so that it could be worth the effort.

In the end, where you brand name falls in the spectrum is a case-by-case decision, which is a statement that isn’t as obvious as it sounds. Yes, of course each name development process is different, but often we fall into the trap of looking around and allowing trends or patterns to weigh more heavily on the decisions than they should. Deciding what factors are most important in the long run and sticking to those decisions can give your drug name the best chance of success, both in the approval process and on the market.