Up until 2008, tiny Davidson College in Davidson, N.C. was little-known to most outside of the local population and a few die-hard basketball fans who remember the school’s glory days on the court in 1960s. But over a few days in March of that year, the Wildcats, led by future NBA MVP Stephen Curry, made a miraculous run all the way to the Elite Eight of the NCAA men’s college basketball tournament.

Almost overnight, the 1,800-student school was on the national radar, and its brand experienced a boom in exposure that many smaller institutions would love to have. 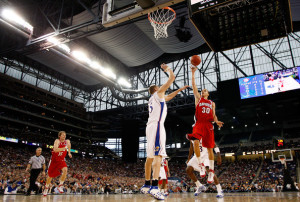 For these schools, national exposure comes along very rarely (if ever), often in the form of the football team going to a bowl game, an academic breakthrough or, at the top of the exposure list, an invite into the exposure behemoth that is March Madness.

What takes an entire season of success coupled with an unblemished run through their conference tournament culminates in hearing their name called on Selection Sunday (another branded term) and a spot on the bracket. This inclusion provides a seat at the table and in the tens millions of brackets printed, researched, debated, analyzed, filled out and monitored by people around the world.

What better time to build your brand, especially if you are in the middle of a major rebrand and are looking to push your new name/logo forward into mainstream use?

The University of Arkansas at Little Rock (UALR for short) – a school with a self-admitted long-winded name – recently went through a rebranding effort, which included changing its athletic teams naming from the UALR Trojans to simply the Little Rock Trojans. Gone is the University of Arkansas precursor, and here to stay is more of a focus on the school’s home city. The new branding efforts also included updated logos, uniforms, websites, font choices and many more brand elements that are familiar to a corporate rebrand.

What to learn more about how you can build your brand? Let’s talk. 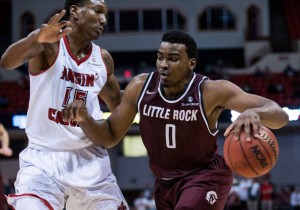 Big Dance, guaranteeing that those brackets would all include the words “Little Rock” when referring to the school. This not only gained exposure for the new brand, but also helped to quicken the old UALR branding into the history books.

The benefits aren’t just to the long-term branding success of the schools. Immediate (and long lasting) financial growth is a common side effect of an appearance in the tournament, which is increased substantially with each round of advancement for the team.

Millions of dollars are distributed by the NCAA to individual conferences based on the success of their member institutions, in addition to the uptick in sponsorships, ticket and merchandise sales, donations and licensing deals. For some schools, a single trip deep into the tournament can help fund their athletic programs for years to come – and this is all in addition to the increase in brand awareness.

So as you fill out your bracket and watch this year’s tournament, keep in mind those schools who you are seeing for the first time, and appreciate their time in the branding spotlight.