The Future of Angry Birds 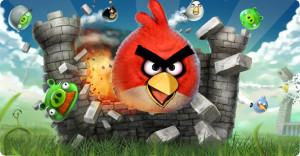 I told myself I wouldn’t get addicted to Angry Birds. But as soon as I demolished those squealing, snorting little pig targets, I knew I was hooked.

I’m not alone in my obsession; there are over 100 million users who play Angry Birds monthly. The game clearly has a loyal following, and has become a staple in American pop culture.

Rovio, the Finnish company who created the game, recently announced plans to take Angry Birds to the Chinese market. The company wants to increase brand awareness with a lofty goal – to become the first global entertainment brand with more than one billion fans.

Instead of creating new games and expanding the master brand’s umbrella, however, Rovio wants to capitalize on Angry Birds alone. Game-themed plush toys, cookbooks, and even merchandise stores are in the works.

“We are betting everything on Angry Birds,” Rovio CEO Peter Vesterbacka said unabashedly at the Casual Connect game show in Seattle.

Rovio is depending on Angry Birds’ unusually expedient success to carry the company far. According to the aforementioned article, Angry Birds is the third most-pirated brand in China after Disney and Hello Kitty — a remarkable feat, given the game is less than two years old. Even more astonishing is that the game has grown faster than any other technological brand in history in terms of active users, according to Rovio’s research data.

These impressive statistics, coupled with Angry Birds’ addictive and quirky brand personality, make for a promising run in China. If the game is already raking in the kind of demand seen for massive, established brands like Disney and Hello Kitty, it’s effectively conveying a brand image of desirability and high regard.

But is Rovio, as a brand, being overshadowed by the Angry Birds brand itself? The company claims it wants a billion fans as an entertainment brand — but people may only become fans of Angry Birds, and not of Rovio, its creator. It will be interesting to see if Rovio’s tactics will help the company’s brand gain prominence on its own as a gaming innovator, or if it will be always be eclipsed by the Angry Birds game.

Regardless, it’s clear that reaching a wider audience of people is vital to Rovio’s strategy.

“It’s not all about monetization now,” Vesterbacka said. “It’s about keeping the fans coming back and building the brand.”