by Guest Blogger
in Behind the scenes, Employees, Halloween

After much rivalry, smack-talk, and closed-door sessions, the 2008 pumpkin line-up was revealed yesterday for AW’s Third Annual Pumpkin Carving Contest.

Each year, the competition gets more fierce, and this year was no exception. Teams pulled out all the stops … giving their pumpkins personalites, acting out skits, and even injecting a little multi-media into their presentations.

Check out the amazing entries below. 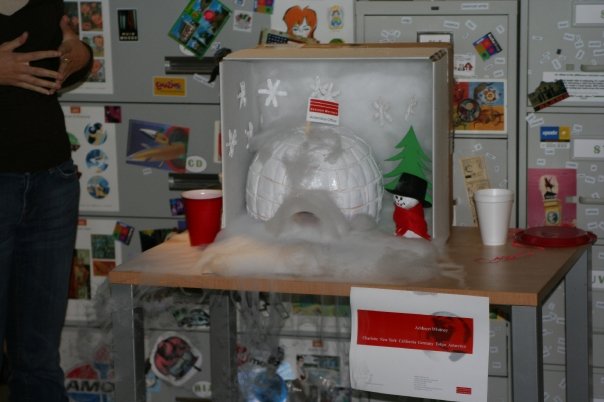 Igloo/Antarctica Pumpkin
This pumpkin was turned into an igloo which was dubbed the AW Antarctica Office because AW has opened a couple satellite offices over the past year. The team completed their Antarctica office with the addition of one lonely ‘snowman’ consultant, Arti, who was made of 3 smaller pumpkins.

Sarah Pumpkin
“Sarah Pumpkin,” aka Sarah Palin, was tirelessly carved by our own wood-carving enthusiast Blippincott. His team worked together to create a striking replication of the Vice Presidential candidate – from her signature hairstyle, glasses and hockey-mom lipstick, all the way to her dainty presidential suit and pageant wave. 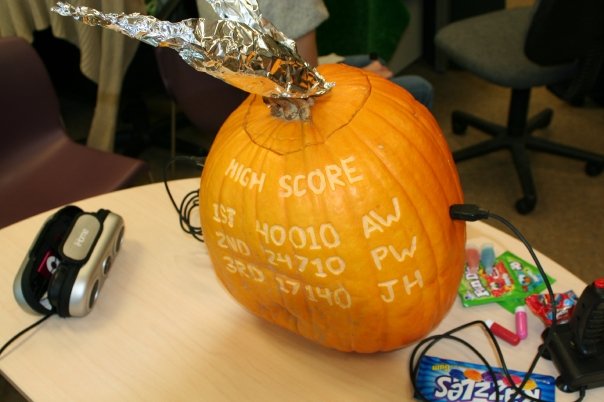 Pac-Man Pumpkin (2008 winner)
An intricate design was carved by this team, who transformed their simple orange gourd into a flashback of the popular 80’s video game. An original Pac-Man game cartridge was inserted into the bottom of the pumpkin, and the joysticks were attached to each side. Onlookers could check out the high scores on the back of the pumpkin. 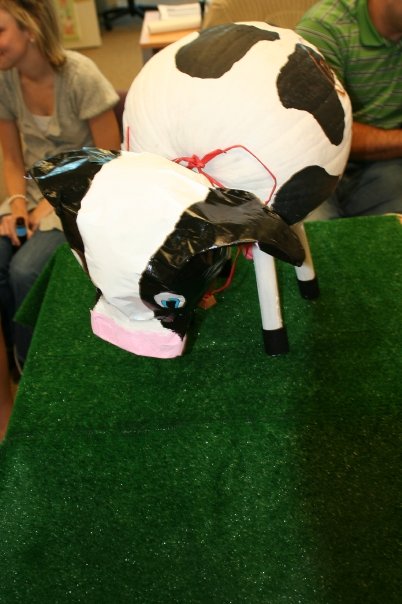 Cowbell
Mrs. Mookin was the name of our little “branded cow” She was a good ole cow but we noticed one thing that she needed help with…a little more COW BELL!! So we turned to our good friend Bruce Dickinson to help us out and really explore the studio space!

BOO-B
BOO-B, a Breast Cancer Awareness Pumpkin, was created in the spirit of Breast Cancer Awareness Month. One in eight women will develop breast cancer sometime in their life and the disease is the number one killer of women between the ages of 20-59. The all pink pumpkin design includes a quote from JFK stating, “One person can make a difference, and every person should try.” With so many women affected–mothers, wives, sisters, and daughters–it is safe to say that everyone can relate, therefore everyone can support the cause. The pumpkin also includes a pink ribbon which has become the national symbol for breast cancer awareness, folded around the stem. Proceeds from the purchases of the pink candy placed inside and around the pumpkin will benefit breast cancer research.

Great Pumpkin Pick Pocket
After long last and much after hours subterfuge Our Team has finally apprehended the AW Bandit!!! Meet Pumpkin Pete the Pick Pocketing Office Pirate! On his person we found:

And look!! Concealed in his head:

For the benefit of the entire Addison Whitney crew who has suffered the thieving indiscretions of this Pumpkin Patch Punk, we have decided to be judge, jury and pie maker—and will be serving him up for your enjoyment—in the break room next Tuesday!