Branding Beyond the Field

When determining the success of a sports franchise brand, the product on the field obviously plays a large part. Wins bring publicity, excitement and recognition, all which are important aspects for any team’s brand.

But much of what goes into building a strong sports brand can’t be counted on the scoreboard. When looking to successfully brand a sports franchise, many lessons can be learned from branding organizations.

Understanding the audience is an important part of ensuring a brand’s success, and with sports franchises two major audience groups emerge – their fans, and the media. These two drive much of the success factors for branding in sports, and but hold much different places in a brand strategy.

The media sits at the confluence of two main arteries in branding – the need for a brand’s essential aspects (name, logo, colors, etc.) and the want for secondary branding (brand characteristics, persona, etc.) – in order to do their job.

A team without a name isn’t a very easy team to write or broadcast about, and one with an unfavorable color palette will cause headaches for the television producers. Additionally, a team with a strong brand and culture is one that breeds quality storylines, leading to additional media coverage. Therefore, when creating these aspects of a brand, the ease at which a franchise can help this group is beneficial in gaining appreciation and assistance moving forward.

The fan audience is one that not only engages in the resulting brand materials, but also looks to be actively involved in establishing a connection with the brand. Franchises would be wise to create brands that strengthen this relationship, from actions designed to ingrain the team into the local culture or fan groups or by including the opinions of their fans in franchise decisions.

New York City FC, a Major League Soccer team that debut this season and plays its games in Yankee Stadium, has embraced the concept of connecting to its city and fans by focusing much of its branding efforts on cementing its role as “New York City’s Team.” From crowdsourcing the decisions of various brand elements, such as the team’s logo, to focusing on what Tom Glick, President of NYCFC, said about branding the team, “We wanted to give birth to a new club for New Yorkers, to build it with New Yorkers.”

The team was smart in this strategy because they understood both the passion felt by soccer fans to their favorite clubs, and also the close connection many New Yorkers have for their city. Combine these two and you have a potential fan group who is deeply loyal to their hometown club, and one they weave into the very fabric of their community. Using them as a resource in building the brand and continuing to help it grow gives a grassroots feel that allows the fans to be involved and connected, strengthening their emotional bond with the club. 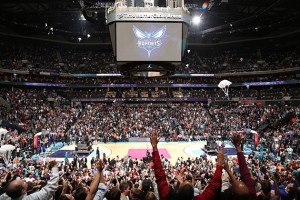 For instance, just as with other branding strategies, finding the right name goes a long way. As they say, you only get one chance to make a first impression, and the majority of the time, the name is that first impression, one that will continue to resonate throughout its time in use.

It is also the brand aspect that carries the most weight in exposure for the brand, as any reference to the team will more than likely use some aspect of its name. The name should resonate with the fans, as the NBA’s Charlotte Hornets learned when they researched a rebrand from their old name as the Charlotte Bobcats.

When the first iteration of the Hornets relocated, the NBA gave Charlotte an expansion team, which was named the Charlotte Bobcats – an example of a name that had no history with the area and no emotional connection with the local population. After years of this disconnect, the team announced to much fanfare the return to the original Hornets name and colors, and the introduction of a logo that hearkened back to the prior Hornets logos.

The acknowledgement of the strength of the Hornets brand and the actions taken to return to this brand showed how much the Charlotte franchise valued their fan audience.

Branding a sports franchise can be a long, sometimes bumpy, journey. These brands are some of the most visible in the world, and their impact can be far-reaching. But by understanding the audiences, working to help meet their needs and allowing for a brand to settle a strong foundation, this global reach can be a welcome return.

Addison Whitney is a global branding firm with a passion for building strong brands.