Recently The Coca-Cola Company has revealed their plans to market all of their Coca-Cola related brands – Coca-Cola, Coca-Cola Life, Coca-Cola Zero, and Diet Coke – as a cohesive team of products, rather than individually.

Market research has shown that there is some confusion about what differentiates these four products, and the Coca-Cola Company hopes that marketing them as variations of one larger product, Coca-Cola, will help not only to clear up this confusion, but also to strengthen the overall brand to the great benefit of each individual product.

As seen to the right, an associated magazine ad emblazoned with the slogan “Good things come in fours,” shows a clear example of what the company’s new strategy will entail. I think bringing brands closer to a larger corporate brand, especially one as powerful and recognizable as Coca-Cola, is great strategy for three of these four brands.

However, Diet Coke, a soda which doesn’t even share the Coca-Cola name like the other three drinks in this branding strategy, has developed such a strong brand identity unique from its corporate company that this homogenization will, in my opinion, fundamentally change Diet Coke.

So what it is that makes Diet Coke so different from other Coca-Cola brands? A Diet Coke, like the Starbucks Cup, has become the handheld beverage accessory of the fashionable, endorsed by celebrities like Ariana Grande and Lady Gaga.

Most recently Diet Coke has launched an extensive and emblematic ad campaign featuring the fashionable and famous Taylor Swift. The red words spelled out on a Diet Coke can coordinate perfectly with Taylor’s well-known red lips. Even beyond this, Taylor aligns perfectly with the brand image of Diet Coke because she has recently become a fashion icon, not just in elite circles of Hollywood, but to the average young woman, a group which Diet Coke has always prioritized 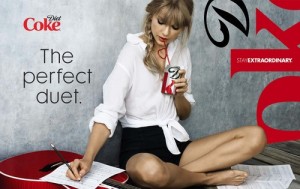 in their marketing. Recently, Taylor’s fashion choices have become very bold, without sacrificing the stylish class she has always been known for. Thus, Diet Coke, a classic but still immensely popular and always innovating, is Taylor’s beverage equivalent.

Diet Coke’s brand isn’t just approved and endorsed by fashionable celebrities. It has even earned the backing of fashion designers themselves. Over the past decade Diet Coke has rolled out a tremendous number of limited edition designer bottles and cans. Comm De Garcons, Diane Von Furstenberg, and Marc Jacobs are just a few of the many designers who have jumped at the chance to have their designs featured on a Diet Coke bottle.

Diet Coke even hosts an annual “Red” fashion show to support women’s heart health and also to remind the world of their preeminence as a stylish soda. Diet Coke, when it was created thirty three years ago, was made with an entirely different recipe than Coca-Cola.

Unlike Coca-Cola Zero, Diet Coke isn’t just Coca-Cola without the calories; it is its own uniquely flavored drink, and just as Diet Coke’s physical ingredients are different from Coca-Cola, so too are the ingredients that make up their branding and marketing strategy.

The day after Labor Day, Diet Coke tweeted “you shouldn’t wear white after Labor Day, but no one said anything about silver and red.” Rather than just wishing its followers a happy Labor Day, the Diet Coke brand took the opportunity of using the day after this holiday to remind the Twitter world of their brand’s role as a versatile fashion accessory.

In my opinion, this really sums up the image of Diet Coke. Not only is it deliciously addicting, but it carries connotations of style that no other soda can match, connotations which risk being lost if Diet Coke becomes only another option in the homogenous Coca-Cola lineup.

Addison Whitney is a global branding firm with a passion for building strong brands.