Charlotte’s Got a Lot

In 2008 when I moved to Charlotte, NC I had no idea I was taking up residence in the “next big thing” city. I was fresh-out of college and not sure what to expect out of my new city that I more or less randomly chose to move to. But I unknowingly stepped right into what I consider the early stages of Charlotte’s coming out party to the world, and now just four years later this city is about to be put on its biggest stage with the DNC coming to town in September. It’s 2012 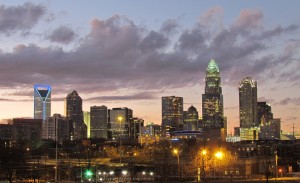 and it’s Charlotte’s year, so let’s take a look at how we got here and why.

In 2008 as our country was experiencing the economic downturn that we all know too much about, and Charlotte was certainly not immune to the economic crisis but that’s not what this post is about. But instead how in the face of what could have been a major blow to the city’s image how city leaders and organizations were able to take a city full of charm and potential and brand it into what is now one of the fastest growing regions in the country through city branding.

In an increasingly globalized world different countries, states, and cities are in more and more competition with each other to capture the attention of tourists and potential new residents, which is why city branding has taken off as an important endeavor for any region.

City branding refers to all the activities that are undergone with the purpose of turning a city from a location into a destination. Rather than being advertising based, city branding is a community wide effort that is focused on delivering an exceptional experience that is both memorable and emotional.

Charlotte is the 2nd largest financial city in the U.S. only behind NYC, and has long been seen simply as that, a financial center. But it is through the Charlotte’s city branding efforts that has reshaped the city’s image to be so much more. It’s hard to put into words exactly how much Charlotte has to offer the world but the city’s official travel resource, Charlotte’s Got A lot, puts it best when they say:

“Amidst a growing cityscape, this destination delivers cultural distractions and attractions, dining and nightlife for every persuasion, and a Southern ambiance all its own. Charlotte’s a city where Olympic-caliber adventurers rub elbows with culture mavens; a city that appeals to both NASCAR heroes and finance leaders; and a city where Northern newcomers exchange smiles on the street with Carolina natives. Visitors are sure to be just as captivated too. A new rip-roaring coaster at Carowinds, some of the best retail therapy this side of Manhattan, whitewater rafting at the U.S. National Whitewater Center, and so much more to engage, excite, and exhilarate show exactly why Charlotte’s got a lot.”

From the city’s organic and undeniable charm to the more deliberately manicured streets and eclectic offering of activities it’s no wonder that Charlotte was selected to host this year’s DNC, and has been branded as the “international gateway to the south.” It continues to steal away residents from the north year after year as it continues to leave a lasting impression on all who travel through it.

Charlotte’s got a lot. It was branded that way, but more importantly stays true to its word, and I can’t wait to see what’s in store for this city in the coming years.