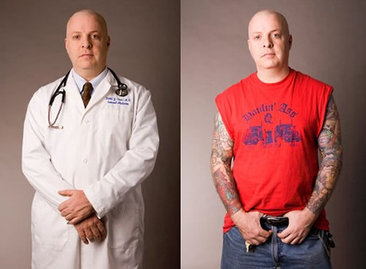 Making Your Mark: Tattooing as a Form of Self-Branding

We all find ways to “brand” ourselves on a daily basis. Just as companies send messages about who they are and what they stand for by using a carefully chosen name, slogan, or logo, we make our own personal statements with the clothes we wear, the places we frequent, the music we listen to, and even the Facebook statuses we post. And yet, much of these exterior signs are subtle and can be changed at the drop of a hat; we can buy new clothes, find new haunts, or change the types of media we consume. So how can one escape the ephemeral nature of self-expression and communicate his or her own personal brand in a lasting way? For some, the answer has come in the form of one or more tattoos.

Tattooing in its various forms has been around since the time of Ancient Greeks, and was explicitly documented in the United States as early as the Civil War (when soldiers would ink up to demonstrate their allegiances). While many of the tattoos of ancient times were compulsory methods of state control, used to mark slaves and criminals, the tattoo has slowly evolved to become a popular and in most cases, voluntary form of self-expression. Today, about twenty percent of all Americans sport at least one tattoo, while the tattooing industry rakes in an annual revenue of $2.3 billion as of 2012.

I began thinking about tattooing as a form of self-branding after my roommate decided to get inked up about a month ago, after years of contemplation, designing and waiting for the right moment. She came back with two tattoos: one was butterfly perched between her shoulders, and the other was a single word, “Desiderata,” written in her own handwriting across the nape of her neck. The butterfly, she explained, is her spirit animal (beautiful, free, yet fragile), made all the more meaningful by the fact that the design was created for her by a dear friend. The word desiderata, meaning things that are desired or essential, is the title of one of her favorite Max Ehrmann poems (read it here). Both tattoos represent symbols and ideas that deeply resonate with her, and provide the odd passerby with an outward glimpse of the personality within. For her, the tattoos create a personal brand of serenity, optimism, and perseverance in the face of obstacles.

According to Jill Fisher, Assistant Professor of Social Medicine at UNC Chapel Hill and author of Tattooing the Body, Marking Culture, people tattoo themselves for multiple reasons, including to mark an important life event, to show group identification or membership or to add personal decoration. Indeed, I’ve heard many tattoo bearers speak of their bodies as a canvas, on which they can place words and images that speak to them, whether it be on an aesthetic, emotional or intellectual level.

Some take this to the extreme, as with the case of model and performing artist, Rick Genest, famously known as “Zombie Boy.” His tattoos, designed to make him look like a member of the living dead, cover more than 80 percent of his body, and help create an incredibly unique personal brand, described as, “effortlessly cool and darkly glamorous…a chiaroscuro of both light and dark—part gentle warrior, part anti-establishment artful dodger…”

His personal brand could wake the dead

He refers to his tattoos as an ongoing personal project that he’s determined to finish, and it has garnered him much public attention (he even appeared alongside Lady Gaga in her “Born This Way” music video). Since his discovery and ensuing fame, he has even come out with Zombie Boy merchandise, including skull rings, combat boots, leather purses and biker helmets. While some tattoo bearers brand themselves to align with an already-established brand (think Twilight or sports tattoos), Zombie Boy has done the exact opposite, creating his own brand that eventually branched out into the larger public arena. That said, you don’t have to look at such rare examples to realize the potential in using the body as a way to share an idea or cultivate an image.

I have asked others why they chose to go under the needle, and the responses have been at times touching, surprising or even amusing. But, I have always learned something more about the person as a result. One of my supervisors told me his tattoo—a fleur-de-lis with a cancer awareness ribbon wrapped around it—symbolizes the Holy Trinity and commemorates a cousin who died of cancer. A friend got a Deathly Hallows symbol because she loves Harry Potter. A coworker, who has the beginnings of sleeves (tattoos running down the arms), told me that the last time he went into the parlor, he held out his arm and said to the tattoo artist, “Surprise me,” because he loves the experience and the euphoric rush that follows the pain.

Even when the tattoo doesn’t necessarily have profound meaning, as in the latter two cases, it can still suggest something about their interests, loyalties or adrenaline-seeking tendencies. In my first example, I see my supervisor’s personal brand as one of thoughtfulness, familial loyalty and spiritual contemplation. For my friend, I see a brand of devoted fandom and child-like excitement. And, in the case of my coworker (who is also an EMT and volunteer firefighter), I see spontaneity, boldness and a love of risk-taking.

However, it is true that the brand the “tattooee” sees is not necessarily the brand others see. In a society where tattoos are still somewhat stigmatized—and often associated with criminality or social deviance—many people look at a tattoo and automatically see a brand of rebellion, recklessness, stupidity or even danger, regardless of the design. Even those who are more open-minded might misconstrue the purpose or meaning behind a tattoo at first glance.

Looks can be deceiving

And so, tattoos present the wearer and observer with an intriguing dichotomy; while it is one of the most obvious visual forms of self-branding, it is also unlikely that the viewer will fully understand or appreciate the brand unless he or she talks to the bearer. It appears that the expression, “don’t judge a book by its cover,” still applies, even if the book comes with illustrations.