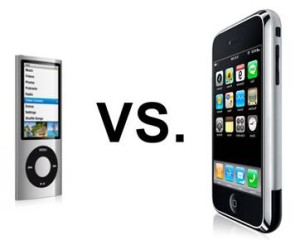 My mother is obsessed with her iPhone. While she taps away on her touchscreen all day, she asks me why I don’t trade in my “clearly less superior” iPod nano (5th generation) for Apple’s newer flagship device. My typical response is that my iPod is my music device and nothing more, and that’s the way I like it, thank you very much.

But then people started using Facebook from their iPhones. Then Angry Birds became popular to play on-the-go. Now, all of my friends have started playing Words with Friends (appropriately).

But me? I’m still here with my iPod. And I’m starting to think my mom has a point.

We are approaching an age of the all-or-nothing device. Phones aren’t appealing to consumers unless they can offer Internet access, Skype capabilities, a slew of apps, e-mail, a GPS, video players, and music, just to name a few features. The basic iPod, which is only a music (and sometimes video) player, simply can’t compete anymore, and so its brand is suffering a slow demise.

The iPhone, on the other hand, is so adept at meeting every technological need that Apple is willing to let the iPod brand be exceedingly eclipsed by the iPhone brand. Why would Apple invest time and money to revive an increasingly irrelevant iPod brand, when it can minimally advertise the lucrative iPhone and garner massive earnings?

By choosing to essentially leave its iPod brand strategy alone, Apple’s sales are starting to reflect iPhone domination. Where iPod sales superseded those of iPhones by $13 million in 2010, that amount shrunk to only a $3 million difference in the first quarter of 2011. If the sales gap diminished that much in just one year, the outlook seems very favorable for iPhones.

The iPod brand’s last saving grace could be its highly established brand image. Like it or not, iPhones will always have their roots from the iPod brand, both in name and in likeness – and many people will always refer collectively to the products as “iPod” devices. Even so, it will be difficult for iPods to hold their own in the coming years against their all-encompassing, digital successors.