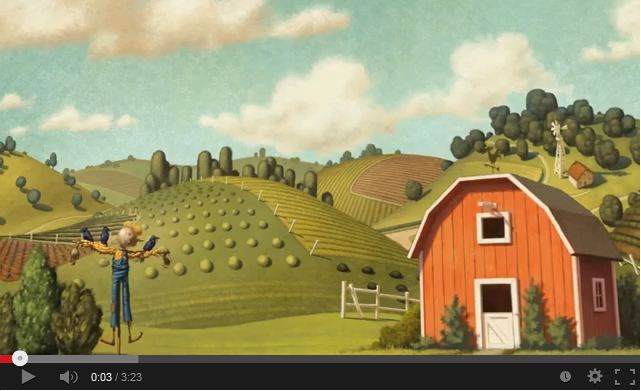 Back in June, I wrote about my undying love of Chipotle and its brand.

I wrote about the company’s original short film, released in 2011 and entitled, “Back to the Start.” The film, by film-maker Johnny Kelly, depicts the life of a farmer as he slowly turns his family farm into an industrial animal factory before seeing the errors of his ways and opting for a more sustainable future. Both the film and the soundtrack were commissioned by Chipotle to emphasize the importance of developing a sustainable food system. The video reached more than four million views on YouTube when it aired during the 2012 Grammy Awards (in its entirety, 2 minutes and 20 seconds). At present, the video has a whopping 7.8 million views.

Fast-forward two years and so many months later to “The Scarecrow.”

I came across this new short film when it launched last Thursday, Sept. 11 and was in absolute awe. From the hauntingly beautiful Fiona Apple singing a childhood favorite, “Pure Imagination,” to the amazingly profound storytelling, I was hooked. Only Chipotle could weave a story that seems so simple, but is, in turn, a profound critique of our food industry. See for yourself.

Oh, and did I mention it’s based around marketing for a game? In collaboration with Academy Award-winning Moonbot Studios, “The Scarecrow” is an app-based, arcade-style adventure game that depicts a scarecrow’s journey to bring wholesome food back to the people by providing an alternative to the processed food that dominates his world (click here for a behind-the-scenes look). Here’s the official game description off its website.

The Scarecrow needs your help to foil the evil plans of Crow Foods and break the crows’ monopoly on food production and supply in the city of Plenty. Tilt your device to navigate through each level, outsmart the Crowbots, unlock extras, and restore hope for animals, farms, and the environment, while providing the citizens of Plenty a healthy and delicious alternative.

The buzz from Chipotle’s latest marketing coup is substantial. A simple Google News search for Chipotle and scarecrow returned more than 6,000 results. Every element has been meticulously thought through:

And, all of the copy surrounding this campaign is clear and concise – case in point:

“The Scarecrow” is another chapter in our commitment to Food With Integrity, and represents what we aspire to accomplish through this mission. Our goal for “The Scarecrow” is to bring awareness of important issues to a broader audience, and we hope it entertains you as much as it makes you think.

To leverage even more success, I’m curious to see if it runs during the Emmy Awards broadcast this weekend. It may have already netted more than 4.8 million YouTube views, but a primetime audience could mean a repeat of its initial “Back to the Start” success (and then some, especially considering the buzz is so big already). I’ll definitely keep an eye out.

So, how does this kind of campaign define Chipotle’s brand and tell its story? From a bigger branding picture, why does it matter? It’s rare for a large company to be so self-aware and smart that it builds a brand where it doesn’t have to blatantly use its own name in marketing and advertising. Chipotle relies on the wholesomeness of its food and emphasizes the importance of its cause to tell its overall brand story. From a bigger branding perspective, Chipotle’s success means more and more companies may need to figure out how to use similar tactics to build their own brands – and, for new companies, it’s a great example of the importance of working hard to do things right.